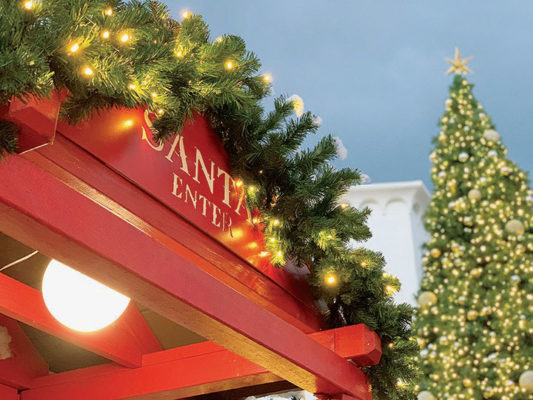 Only days removed from the sounds of sirens rushing to the scene of the Cave Fire, locals and tourists alike will welcome the sounds of something more festive starting tonight.

The sleigh bells will officially return to Paseo Nuevo, as Santa will finally open his doors to children and adults alike, looking to grant every wish this holiday season.

And he won’t have to use any temporary walkways or avoid loose bricks, as the shopping center has halted its renovation and put the place back together—just in time for the holiday shopping season.

“All according to plan,” said Paseo Nuevo’s Mary Lynn Harms-Romo, the center’s senior marketing director. “We’ve been looking forward to having Santa back, and had to get the place in shape for his return.”

On Christmas Eve, Santa has to get on the road a bit earlier, closing up his annual appearance with a 10 a.m. to 5 p.m. shift.

And while Santa Barbara County received a good dose of the real stuff—with potential for more this morning—the shopping center is bringing back its popular night snowfall shows, “Let It Snow,” starting at 6 p.m. nightly. They’ll run every night through New Year’s Eve, excluding Christmas Day.

The holiday festivities are only an interlude for the renovation project at Paseo Nuevo, as the center had decided early on that it wanted to give all of its shops the best opportunity for sales this holiday season.

Ms. Harms-Romo explained that the shopping center will remain mostly construction-free, with only touch-up work being done through the end of the year. “It was always our goal to have this done for the holidays,” Ms. Harms-Romo said. “A few things were offtrack, so we are just going to take a break, going to stop and have a great holiday season.”

Beginning in January, the renovation will reconvene, with hopes of a grand reopening in May. The project has been fairly smooth, with only a pair of obstacles to date, including finding a second, smaller sinkhole near Nordstrom. It has now been repaired.

There will be minor work being done in December, mostly cosmetic and not likely to interrupt foot traffic. “It’ll mostly be holes that we have in walls, landscaping and some speakers,” Ms. Harms-Romo said.

Paseo Nuevo is without its seasonal Night Market this year after issues over a potential ice rink in the Ortega Building caused Glen Broomberg, the owner of the market, to decide to cease operations ahead of the holiday season.

A handful of the businesses that partook in the market last year have found different areas of Paseo Nuevo to utilize instead.

“It’s great to be able to accommodate them,” Ms. Harms-Romo said. The Ortega Building—which housed Macy’s in recent years—is a topic of discussion for the shopping center, with the focus squarely on having multiple tenants move into the building at some point in 2020.

The shopping center has been meeting with various city groups to discuss what they’d like to do with the building, with Ms. Harms-Romo indicating that it would likely house restaurants, entertainment and retailers alike.

“The plan is to repurpose the building with more than one tenant,” Ms. Harms-Romo said. But, for now, the shopping center will embrace its biggest tenant — Santa.