Paseo Nuevo, in the heart of downtown Santa Barbara, on the Pacific Coast of California, is completing a multi million-dollar renovation designed to enhance the outdoor lifestyle shopping center with unique common-area gathering spots including a reimagined Center Court, enhanced lighting, abundant landscaping and new brick and tile pathways plus the addition of water and fire features and three unique public art installations! 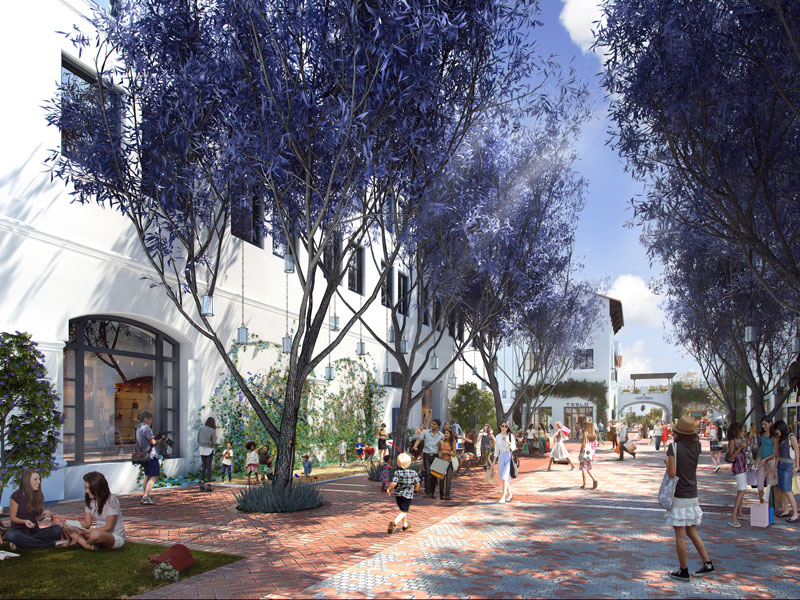 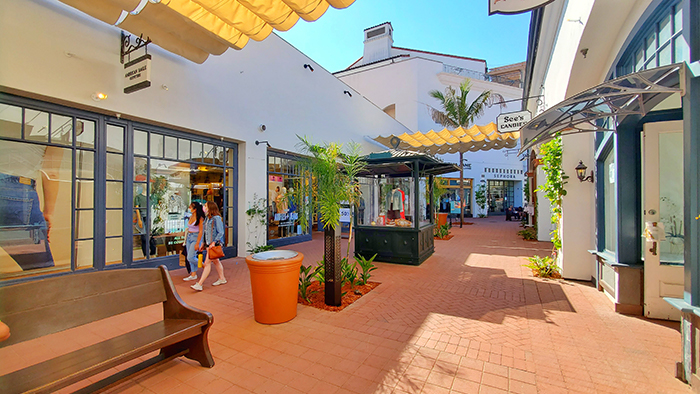 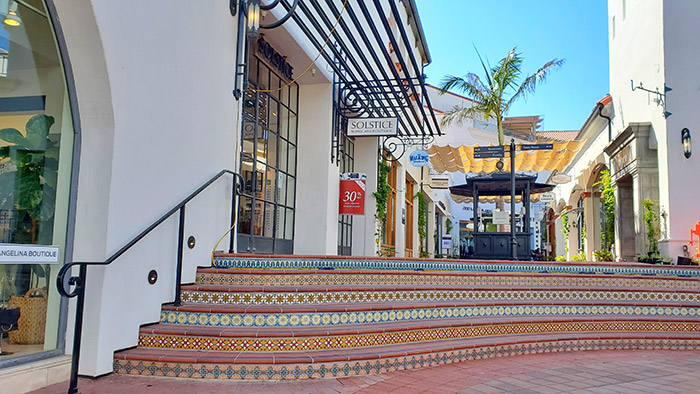 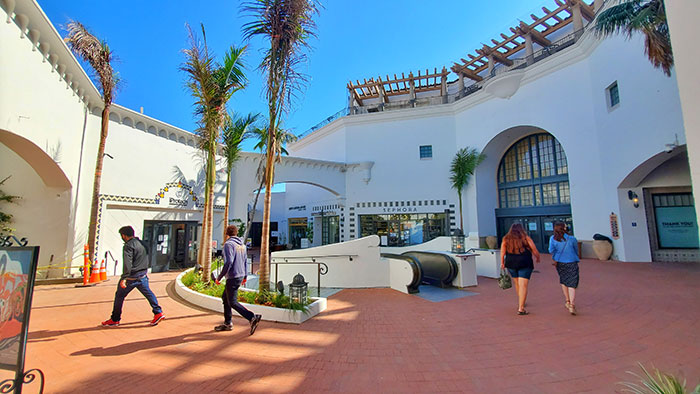 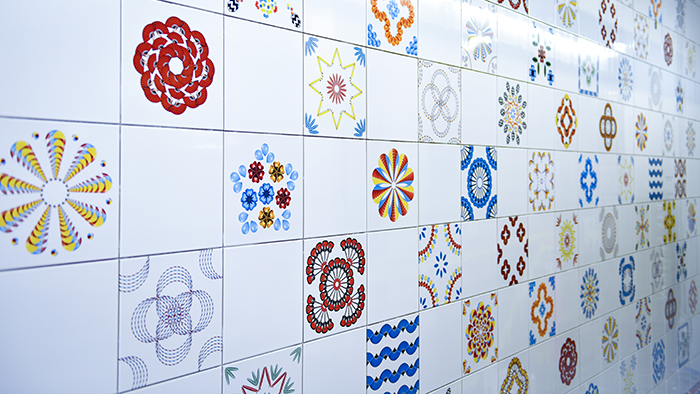 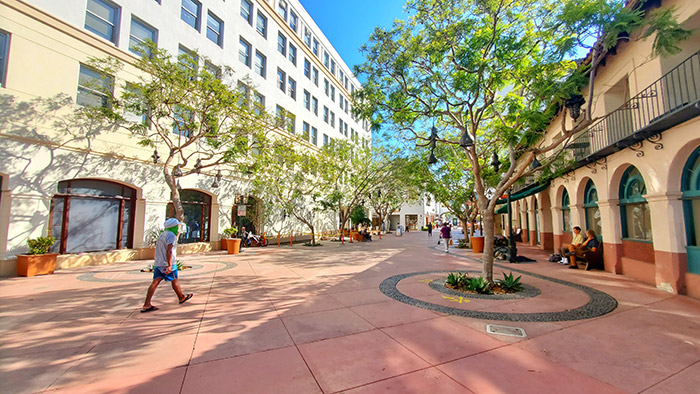 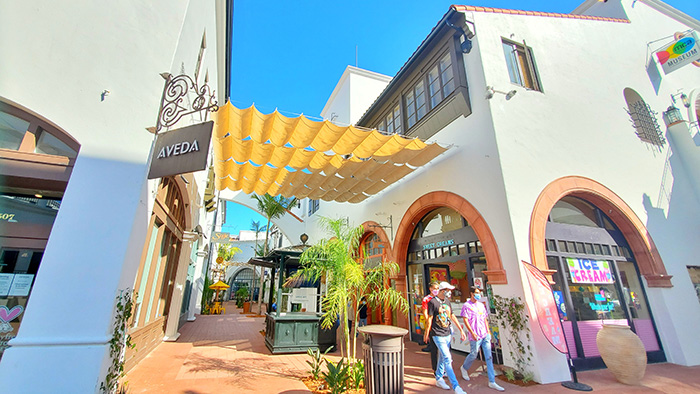 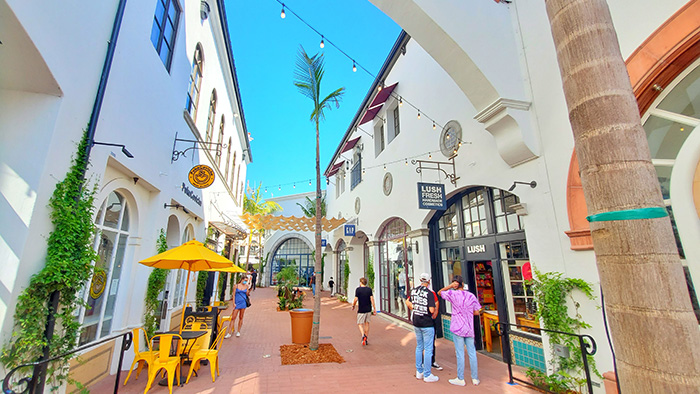 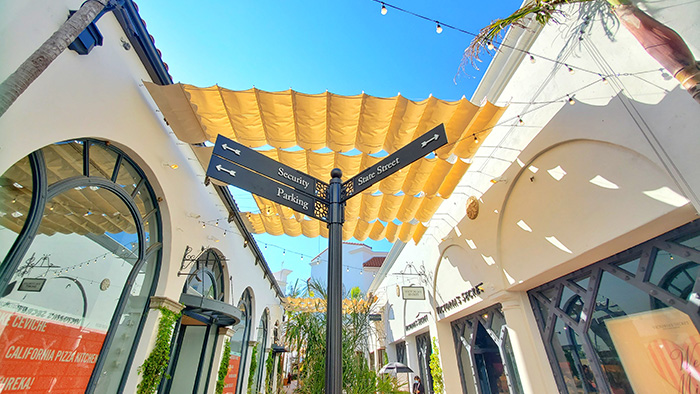 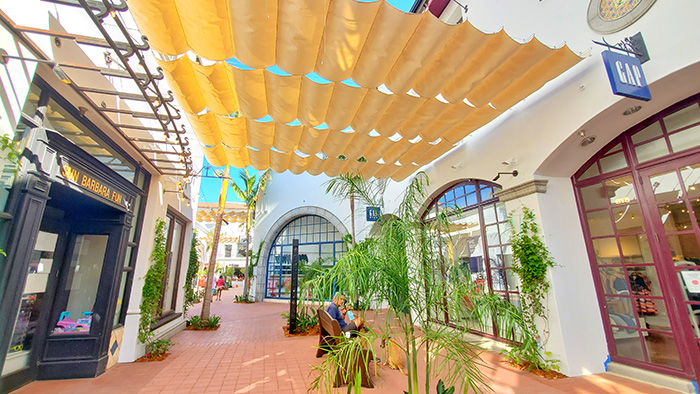 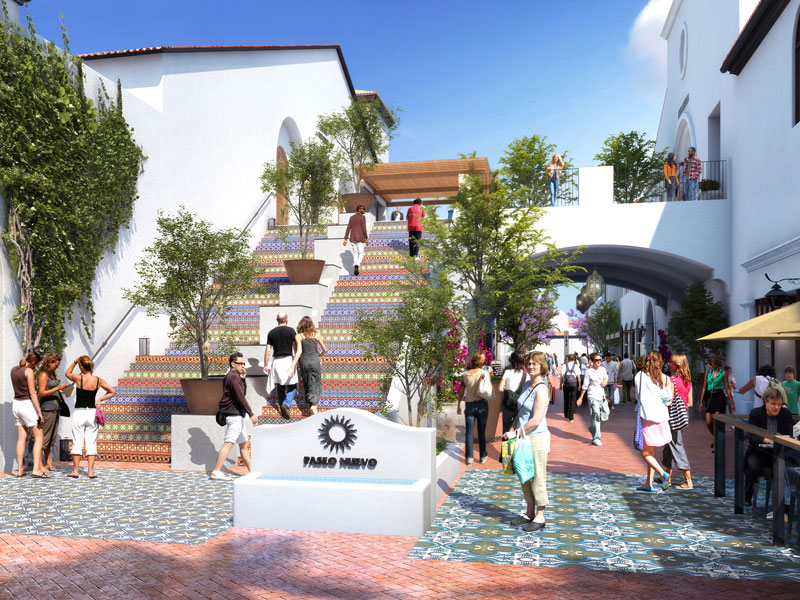 New enhancements and upgrades include:

Be the first to learn about new features, sign up for our newsletter or FOLLOW US on Social Media. The changes envisioned by Paseo Nuevo are certain to enhance the positive experiences that residents and visitors alike will share as Santa Barbara finds ways to offer even more in its community. 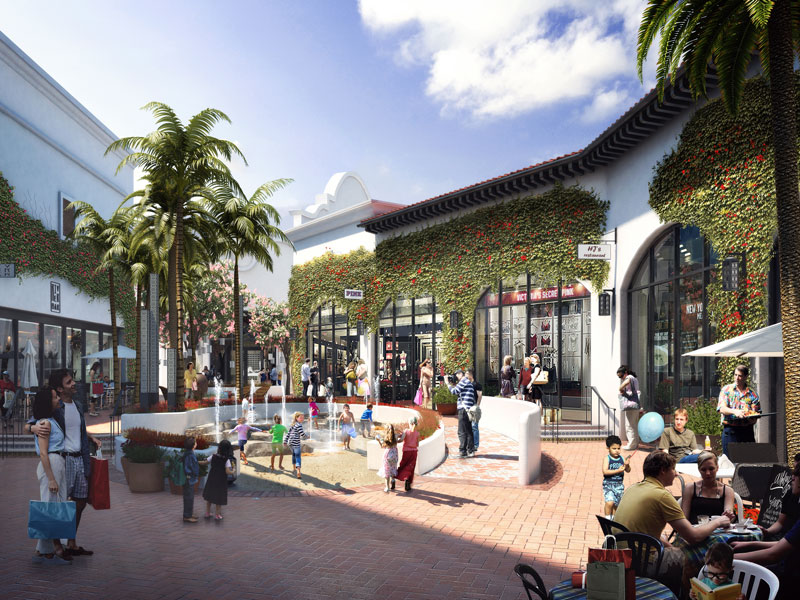 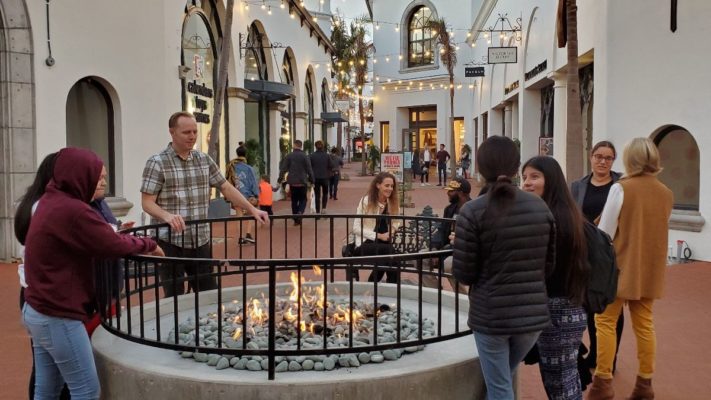 As we embark on 2020, here is an update on our efforts to reboot State Street’s retail vibrancy with a complete makeover of Paseo Nuevo and repurposing of the Ortega Building.

Since kicking off the privately funded $20 million renovation of Paseo Nuevo in April 2019, we’ve made steady progress in upgrading the 30 year-old center to better meet the needs of our community and shoppers, and to create unique outdoor experiences for the whole family. After a short break for the holidays, we will pick up construction work again mid-January to complete the renovation by summer when we will celebrate our 30th Anniversary and Grand Reopening. Watch a time-lapse video of our progress here.

In early 2020 we will be introducing three new public art installations, all created by local artists. Look for a Light Based Projection experience in Center Court, an Interactive Educational Exhibit in the South Court and a large scale ceramic mural in the lower-level of North Court. We are excited to showcase the incredible talents of several local Santa Barbara artists and continue Paseo Nuevo’s heritage of support for arts and culture.

Thank you for your continued patience and support as we complete the reinvention of classic Paseo Nuevo. All stores remain open during the renovation. Get connected to receive updates, sneak peeks and ongoing promotions. Follow us on social media @ShopPaseoNuevo or text your questions to 805.900.7358. 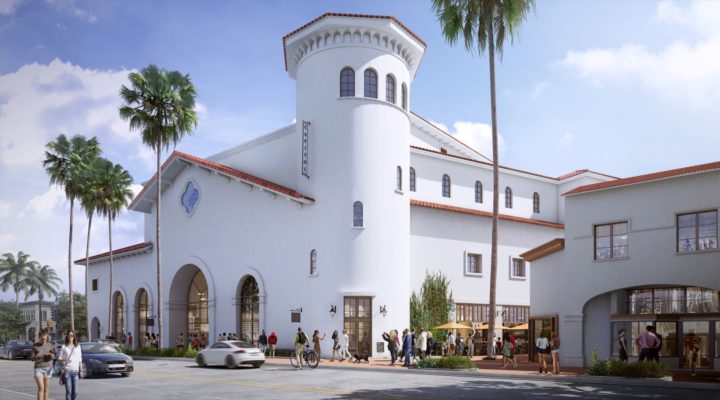 Our team conducted an online survey during 2019 asking residents how they would like to see the Ortega Building (the former home to Macy’s at State and Ortega Streets) repurposed. With more than 1,000 Santa Barbara County respondents the results are clear: residents want to see a dynamic blend of entertainment, fitness, food, grocery, and restaurants in the Ortega Building. See a summary of the results here.

We have spent the better part 2019 considering opportunities to create a dynamic reactivation along Ortega Street as well as State and Chapala Streets, assessing the building’s constraints, evaluating what has been strong tenant interest and seeking community feeback through the online survey and meetings.

Our goal is to submit plans to the City in the second quarter of 2020 to begin the next exciting phase of Paseo Nuevo’s reinvention. We are grateful for all of the community input and ideas we’ve received and are equally excited to bring the Ortega Building back to life as a vibrant entertainment and retail complex with what we anticipate to be an additional $30-50 million private investment. 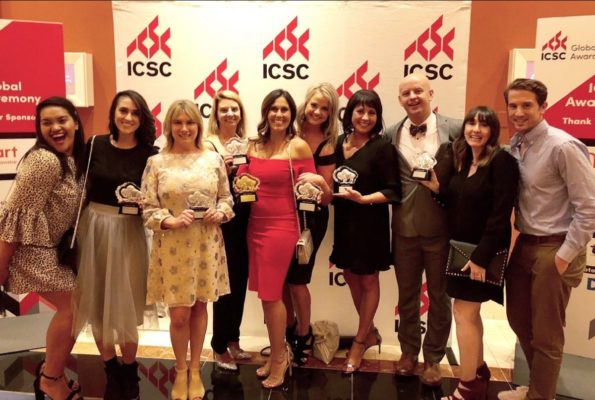 We are grateful for another year as stewards of this community hub that represents one-third of the retail and restaurant square footage downtown. As the City’s top commerce destination, we are committed to providing a quality retail and cultural experience for residents and visitors alike, supporting the vitality, safety, and success of the downtown corridor and honoring Santa Barbara’s unique historic character. 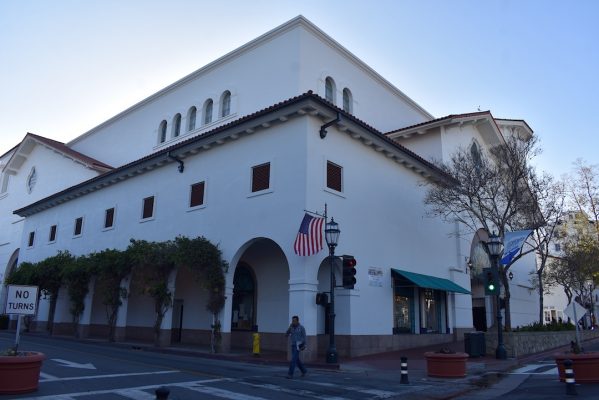 The former Macy’s building in downtown Santa Barbara will be transformed into office space, the Hayes Commercial Group announced Monday.

Located at 701 State St., the 132,500-square-foot building in the Paseo Nuevo shopping mall will feature the “largest office floor plates” in Santa Barbara’s downtown, with more than 40,000 square feet on each level and half-floor suites in the 20,000 square feet range, according to Hayes.

“Frankly, there aren’t a lot of tenants in our area looking for 20,000 or 40,000 square feet of office,” Francois DeJohn of Hayes Commercial Group said in a statement. “So we are marketing to companies in Los Angeles, Silicon Valley, and beyond to consider adding an office location in Santa Barbara.”

The ground floor of the three-story building is being marketed to retail, restaurant and grocery tenants, Hayes Commercial Group said, and the building is expected to accommodate a mix of commercial uses.

In 2018, El Segundo-based Pacific Retail Capital Partners acquired the vacant structure, which is now known as the Ortega Building.

Pacific Retail’s architects determined that the structure is not suitable to convert into apartments or condos, according to Hayes Commercial Group, which will be marketing the office spaces.

“Office is the ‘highest and best use’ for the building, especially the upper two floors,” Greg Bartholomew of Hayes said in a statement. “State Street has more than enough retail space already, and bringing potentially hundreds of office workers to this location every day would help vitalize the area.”

He added: “Downtown Santa Barbara has become a focal point for tech tenants during the past 10 years. With companies like Amazon, Honey, Sonos and Invoca leasing large office spaces along the State Street corridor.”

Macy’s occupied the building at the corner of State and Ortega streets from the time Paseo Nuevo was built in the early 1990s until the national retailer announced that it was closing its doors in early 2017.