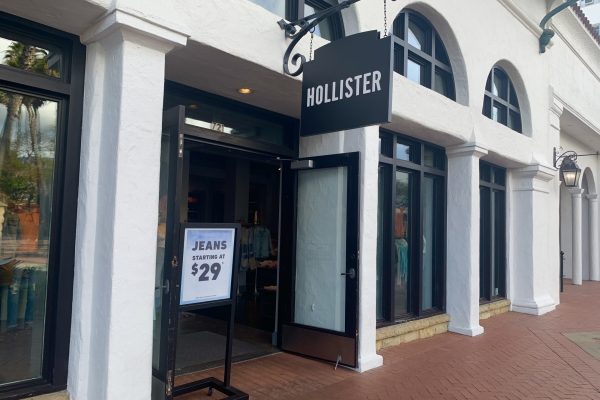 Santa Barbara’s downtown is getting younger.

Abercrombie & Fitch, the well-branded clothing retailer that closed its doors in January, has opened a sibling store. It’s intended to attract even younger shoppers than the teens and twentysomethings who frequented Abercrombie & Fitch.

Hollister, at 721 State St., focuses on the “carefree spirit of the endless California summer for the teen market.”

It’s target demographic is the 15-to-19 age group.

“It fills a niche in downtown Santa Barbara for this customer who makes up approximately 22% of our demographic,” said Mary Lynn Harms-Romo, marketing manager for Paseo Nuevo mall. “We are encouraged that Abercrombie has made the decision to meet the needs of the market as retail is everchanging and retailers who are committed to evolving will continue to succeed.”

The store sells a variety of jeans, tops, dresses, sleepwear and jackets as well as three types of “skinny” jeans, including “exteme skinny,” “super skinny” and just plain “skinny.”

From the sale of each World Teen Mental Wellness Day Collection item, $10 will support the HollisterConfidence Fund’s grant-making efforts

The shop at 3455 State St., Suite 6, will specialize in personal care services, such as eyebrow microblading, lip blushing, teeth whitening, and face and body treatments. Rodriguez decided during the COVID-19 pandemic that it was time to start her own business.

The company uses pigments to create semi-permanent makeup products that can last between 18 months and several years. The treatment is popular in Los Angeles.

The Hibachi Steak House & Sushi Bar, formerly known as the popular “Something’s Fishy,” appears to have temporarily closed its doors.

The restaurant at 502 State St. was dark all week, with the doors closed and no one on the inside.

Calls and efforts to reach the restaurant through social media were unsuccessful.

Yelp states that the restaurant is temporarily closed until April 22, 2022.

Although most of the other restaurants on the 500 block of State Street seemed to have enjoyed the benefit of outdoor dining, the Hibachi Steak House & Sushi Bar, known for its grilling in the middle of the restaurant for all to see, apparently has not fared as well.

Ponder will work as the director of sales.

He previously worked at Kinkos in 1992 as a color specialist before becoming operations manager. He left Kinkos in 2004 to be the chief operations officer at CyberCopy, a market leader in construction printing and graphics services for architects, engineers and contractors. He became vice president of sales and marketing in 2008.

CalCoast Glass Tinting Inc. is the Premier 3M Dealer and a leader in glass treatment films with its expertise, customer service and high-quality workmanship, according to a news release.